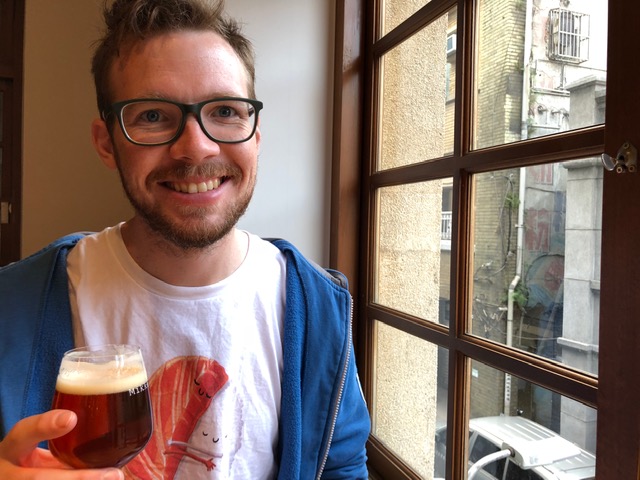 Annual leave again, this time we were off to Asia, not just for beer of course, but for the purpose of this blog thats mostly what I’ll be telling you about. After the usual red eye flight, my other half and I arrived at our Air BnB in Taipei, a cute little fifth floor rooftop apartment, right near one of the many night markets. I was very pleased to see on the way there that 7-11 and Family Marts, like in Japan were thriving here, which means that you can quench your thirst for beer 24 hours a day. After a bit of a nap and some dinner, we walked to the nearest “brewery” to see what was up.

Craft breweries in this part of the world seemed to be more like tap houses and I can only assume that the beer is brewed offsite somewhere, given the stylish yet intimate spaces of venues like 23 Public, complete with classic chalk board aesthetics. Never the less these guys served some quality fresh brews with a strong American influence, so pretty much like Australia, hops hops and more hops were all the rage.

Over the next couple of days I checked out as many other crafty venues as possible. Zhang Men Brewery was worth a visit for their AIBA Gold Medal Imperial Stout “Professor X”, Barrel Aged and on tap, rich, complex and super smooth. I was also surprised that Mikkeller had a taphouse in Taipei, the Danish based Gypsy brewing operation, most famous for their wild fermented beers. Though I love sours there were a couple of items on the menu a little bit too barnyard for my liking. It’s a ‘funky’ venue with a good vibe and some local guest taps as well, that I highly recommend checking out.

Someway down the east coast, we traded out the more flavourful brews and city scapes for Taiwanese macro lagers and breath taking national park. Following some time amongst the peace of the mountains and greenery, we returned to Taipei and went for a few more sneaky beers at 23 Public before flying out the following morning to Hong Kong.

After checking into our accomodations we once again headed to the nearest watering hole, this time to meet our friends who I would head on to mainland China with a week later. Until 1997, Hong Kong was still under governance of the British, something I learned from the screen adaptation of James Clavell’s Noble House. As a result, the city a had a vibrant blend of culture and some things that were just straight up English.

A perfect example was The Trafalgar Brewing Company, which has an actual on site brewery, an exclusive list of bottled and draught English ales such as Theackstons Old Peculiar, and nice line up of whisky too. I’m not a massive fan of some English beers, probably because the journey to Australia often isn’t kind to its freshness, and some butterscotch flavour (Diacytl), can be appropriate. Though English yeasts can also present some lovely pear like esters and have the ability to make malt character sing, a few traditional ales in, it was easy to gravitate towards American IPA’s “again”.

At the Kowloon Taproom, I tried “Oh Bacon” from native brewery Black Kite, subtle caramel and toast with a restrained level of smoke. Delightful! I had read good things about Black Kite so the night before my friends and I went looking for it. Alas, half a day of walking all over Victoria Peak and working up a mad hunger and thirst had led us to an industrial area on the other side of the island were we came to the realisation that it wasn’t open to the public. Funny Story. We settled instead for a Tsingtao on the side of the road before heading back to the city for more drinks and a feed at Roundhouse Chicken and Beer.

Of course a trip to HK for a couple Aussie beer lovers wouldn’t be complete without a visit to Little Creatures in Kennedy Town. Up the western end of the island, LC Honk Kong offers a range of limited releases brewed on the little kit behind the bar. The usual suspects are presumably brewed out of Australia and I must say they drank fresh as kittens, compelling us to work our way through the whole range, starting with the Pils and finishing on a couple pints of IPA.

From the mountains and waterfalls of Taroko National Park to hiking over the Dragons Back for a local beer at Big Wave Bay Beach, with its increasing demand for quality craft, working my way around this corner of the world has left me wishing for a Beerland brewpub here one day.